So, we’ve been on the road for a few days now, but this is the first stop that has given me even a moment to write of our adventures so far.

We left on Thursday from Baltimore, Md – home of the National aquarium, home of the Walters Art Museum, and last resting place of Edgar Allen Poe.  We started where I-70 stared and began our adventure westward. This was going to be the big push to get the trip started and we went farther than we had originally intended. We started in overcast skies and moved into driving rain which made the trip longer and feeling a bit treacherous at times – not being able to see the marked lines on the road made driving a little more exciting that I would have liked it to be! We made stops for a stretch and a rest about every 2.5 – 3 hours of driving to get the wiggles out. Our first big stop was to see a friend from university just outside of Columbus, OH. We only had an hour, but it was good to see him in person and to know that there are just some friendships where you can pick up and keep going without lots of drama or guilt for not being the best as keeping up. We then pushed onward to our over night stay in downtown Indianapolis, IN at the Crowne Plaza Hotel at Union Station where they have Pullman cars that have been fitted up as hotel rooms. They were very comfortable, clean, and lots of fun! The hotel is filled with paster statues of various folk from past days of rail travel. The cars each have two rooms in them so they are spacious even if they don’t look much like it. BUT having ridden on Amtrak in one of the more modern sleeper cars, these are glorious! The staff was attentive, but not overly so. It was worth the push forward. The night’s rest was good and we’d all stop over again if given the chance. 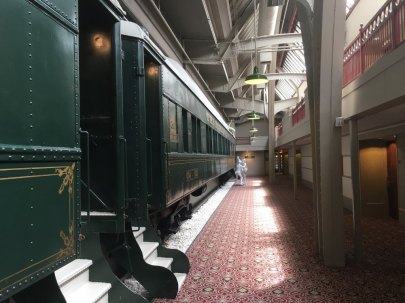 After checking out we went to meet a relative (don’t ask me to give specifics, 2nd cousins or something like that) for breakfast.

One of the nice things about this trip is that it is giving us a chance to see folk we haven’t seen in some time. It may not be for long, but it’s nice all the same.

States driven through on day 1: Maryland, Pennsylvania, West Virginia, Ohio, and into Indiana! 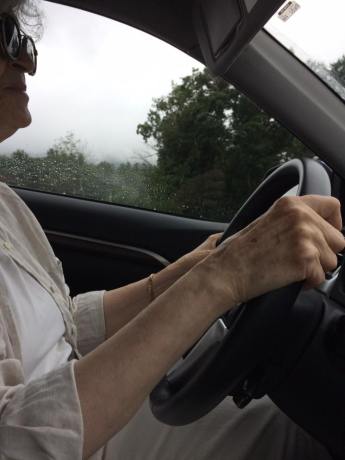