I know. I jumped right into day four and potato farms. Green Gables day was so full that I left off too soon. The last stop of that very full day was at Confederation Bridge.

The longest bridge over ice covered waters in the world, Confederation Bridge links PEI and the province of New Brunswick. It opened in May of 1977 after four years of construction, completely changing the way of life on PEI. You can still get to PEI by ferry from Nova Scotia. It operates from May through December. With the bridge, Islanders have year-round access to the outside world through New Brunswick. It is an impressive structure and well worth a visit. The views are breathtaking.

I enjoyed the lighthouses on PEI. There is a great view of the Strait from the Port Borden Range Rear Lighthouse that occupies a central place in the windswept park around the bridge. It flies the flags of Canada, the three Maritime Provinces (New Brunswick, Nova Scotia and Prince Edward Island). The PEI flag is the one with the heraldic lion of King Edward, Duke of Kent’s coat of arms and the three trees under a great oak tree. The great oak represents Great Britain with the saplings standing for the three counties of the Island (Prince, Queens and Kings). It reflects the provincial motto, Parva sub ingenti (the small under the protection of the great).

A railroad car and a  bit of track from the old rail line that once connected all of the island stand near the shore. At one time it would have been possible to travel the Island on the Prince Edward Island Railway without a car or horse and buggy. The railway made it possible for farmers to get their produce to Charlottetown as well as to visit other parts of the island. By 1875 it extended the length of the island from Tignish in the west to Souris in the east. Georgetown and Charlottetown were connected by branches. Like the Confederation Bridge, it changed a way of life on the Island. People who lived in virtual isolation were now connected to the whole island. Not only could they travel by rail, they now had postal delivery by train. 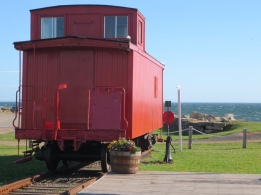 When the first ice-breaking ferry was introduced in 1917, the railroad was connected to the mainland. The new ferry could carry railway cars. The old narrow-gauge railroad tracks that covered the island were gradually replaced with standard rails like those used across Canada. By 1948, PEI boasted all diesel engines, the first province in Canada to do so. But the automobile began to replace the train for most passengers and a new highway system made the rails redundant. By 1989 all of the trains had been removed from the Island.

In 1994, the province bought the rail routes from Canadian National Railways. They were turned into a provincial bicycle and hiking trail, completed in 2000. You can visit the Elmira Railway Museum and the Kensington Station where you can view artifacts and get a feeling for an era gone by. An old post card shows people waiting at the station in Georgetown as the train has pulled in to the station. 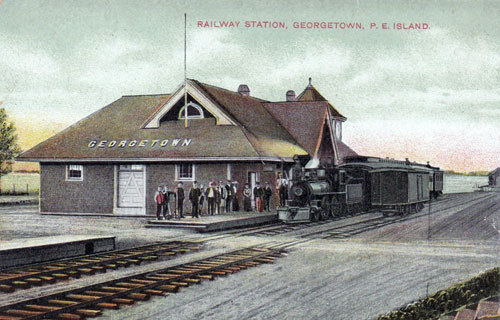 Unencumbered by facts or experience in the matter, I was sorry to learn that the railway no longer exists. To get around the island you can bicycle or hike along Confederation Trail from Tigerish to Elmira. Otherwise, you’re limited to tours or renting a car. So I get all kinds of nostalgic feelings when I imagine what it must have been like to ride across the Island by rail, possibly even sitting in a seat behind Anne Shirley. As  Edna St. Vincent Millay put it:

My heart is warm with friends I make,

And better friends I’ll not be knowing;

Yet there isn’t a train I wouldn’t take,

No matter where it’s going.*

Day five coming soon and no more back-tracking!  Hope it was worth it to you.