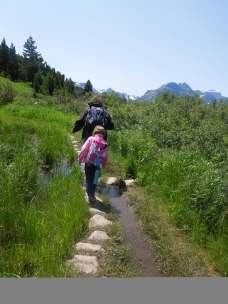 following one of the many trails of GNP

So, since I’ve been on this adventure I know how it turns out – that gives me an advantage in the telling of the tale. I can build the suspense and I can drag out the details, or move along quickly as I so choose. Ah, the power of the writer. If I were writing using fictional characters I would have to move as they developed, but here the events have taken place, the characters are set and alive (fortunately not as doomed as Pirandello’s “Six Characters”) and I can tell the truth or create a great fish tale. However, in this case the fish tale might pale with the reality of the day, or rather the evening but you’ll have to wait until I get there!
Another glorious morning! Did we luck out with the weather on this trip. We were prepared for almost any sort of weather knowing that in the mountains things can change rapidly, but we had blue skies and warm weather – and fortunately not as warm as apparently home was

experiencing. We had one day left and the day before had us exploring the side routes around the Saint Mary Visitor Center. I know I posted about the 4th, but we did actually do more than go to the Blackfoot event. We took a short walk up to the old ranger station and found that it was closed, but a volunteer, Sheryl Mink,  was there setting things up for this day’s event which was water coloring and mural work. She told us to come back since she was closed for setting things up

and shooing out the mice that had taken up residence during the winter. And really, who can blame the mice for wanting to get out of the cold?!? We took the trail leading to Red Eagle Lake Trail coming off from the old ranger station. It was beautiful and quiet and we sang to keep the bears away for our girl who was a bit worried about them being close by. On the day we had gone into the Trading Post to pick up the car she’d seen the bear bells for sale and asked, “Why would you want to give a bear a bell?” Good question. Why would you? So we sang since the bears aren’t deterred by the bells from what we’ve been told.
It was nice to have a slower paced day with no real need to rush here or there. We did our packing and our checking out since we were anticipating that we’d need to be at
the train station around 6:00 p.m. for our train leaving at 6:45 p.m. to Portland, OR. And once that was done we went back to the ranger station, the hike and just enjoyed the afternoon. We have a feeling that we’ll return to explore other parts of GNP – we haven’t even begun to explore this vast wondrous space. So, up and over to explore and do some painting!

Sheryl put us right to work first on adding a few clouds to the mural for 2012 and then we got to explore water coloring. it was really a nice way to spend an afternoon and it was rather full of people wandering up and into the old ranger station.  AEB had a great time working on two water colors and getting advice from Sheryl about her works and telling her about her field kit with sketch pad, pencils, pens, scissors, sharpener, clipboard, etc. so she could sketch when she felt 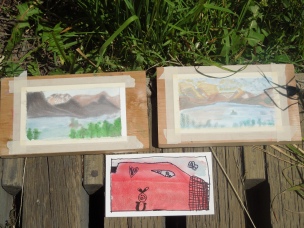 the desire as we traveled.
We found out that Sheryl’s husband and daughter volunteer up at the visitor center and they come out for the summer to volunteer and enjoy GNP. I wonder if Amelia and I will do the same as she grows and decides what sort of summer adventures to have.
The last thing that happened before heading back to the lodge and turning in the car was that our girl was made a Junior Ranger. As a mum, I should have known to take the camera 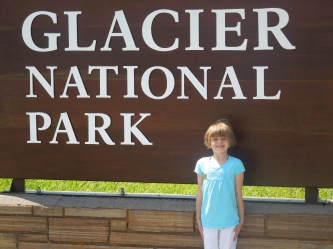 for such a proud moment, but I forgot in the excitement of going into the visitor center so our girl could show a ranger her work and tell of her time in the park. The fellow behind the desk asked her if she’d done some hiking and what she’d done while at the park and approved the work in the junior ranger booklet she had worked so hard on filling out. He had her hold up her right hand and make a pledge to care for the park and help protect the wildlife. She felt very solemn doing it and said afterwards that if she had known it was going to be such a great responsibility that she might not have done it, but now that she was a Junior Ranger she was going to take her role seriously. She was given a badge and a sticker that said she’s been hiking. She put the badge on immediately – oh the pride! She wore the badge the rest of the day and would stop and look at it from time-to-time and beam.
Time to head back on winding roads to turn in the car, check on the train status and get ready to head on out and back on the Empire Builder to Portland! This next bit deserves its own post…