This is really retrospect as it’s been four years since we took this trip on the rails of Amtrak. Our girl was six years old and just as full of the adventurous spirit as she is today. Start ’em young! Then not only will they continue to want to include world travel in their futures, but the world won’t feel as small or scary.

We started our train trip on Friday. There was no wifi on the sleeper train and I have no internet on my mobile and don’t really want it. So, here’s me catching up with the blog from the start to the near end. Each day, from here until I’m done, I’ll add what I’ve reflected, experiences, etc. as I logged it on the computer. It was nice not being connected. It was nice not being accessible to everyone at any time. But now I can fill you in and share the trip of riding the rails…Aaaaallllll Aaaboard! 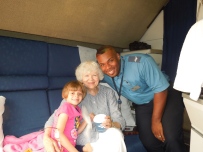 We’re on the Capitol Limited heading from D.C. to Chicago. So far, so good. Actually, so far so great. The folk couldn’t be nicer and the accommodations, though by hotel standards, are cramped but clean and rather nice. Large widow to look out of, tiny sink to do one’s ablutions in, a toilet/shower space, a pullout tray with checker board, upper bunk currently folded up, and the bank seating up so we can sit. Eventually the attendant, Cliff, came by to welcome and acclimate us to our cabin and the train. Very nice man.
Before supper there was an announcement that they had Trails and Rails fellows that would be talking about the history of the C&O Canal. They would be getting off at Cumberland and mum went to go hear what they had to say while AEBand I stayed behind. AEB watched a movie and I fell asleep. There’s something about the rock of the train and the exhaustion of gearing up for actually getting off that wiped me out. Mom came back in time for supper and had lots to say about what she learned. Interesting history of the C&O, which I knew a bit from AEB’s father who has a great love of the American Civil War history so he knows a lot about the history of the places were the battles were fought, especially in and around the area he lives. I’d recommend him as a tour guide any day because he does a great job talking about the events that doesn’t feel like it’s either above one’s head nor dumbing things down. We pulled into Harpers Ferry just before supper – one incredibly beautiful place. Great hiking in Maryland Heights and a view of the Potomac and the Susquehanna coming together. There’s a rock known as Jeffercon’s Rock where supposedly he stood and declared that this was surely the most beautiful places on God’s green earth. I think he’s not far off. 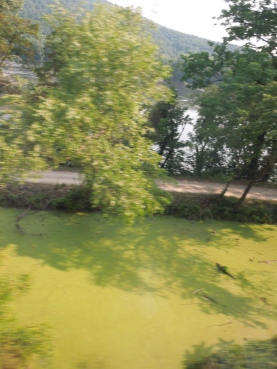 HF station stop
Our dinner reservation was for 6:00 p.m. and Mike was our gracious waiter. Quite civilized! Red carnations on the tables, table cloth on the table. I had lovely herb roasted chicken, our girl had pizza and Mum had pork roast. It was a very pleasant meal. After supper we went to the observation car where the roof is glassed in and the walls are pretty much glass so you get these wonderful views of the land you’re riding past. Eventually it was late enough to turn in and the awkward routine of getting ready for bed began. These cabins are tight as they are, but lower the seats and the upper bunk and suddenly you are tripping over yourself and everyone else in the room. You either come up with a dance to move to, or you keep stepping on each other’s toes. AEB finally got herself settled in the top bunk, but didn’t want to sleep by herself. Mum climbed up to join her and suddenly AEB thought that perhaps she would move down to the lower bunk where there would be more room.  And then – light’s out.

In the morning we woke, showered in the tiniest shower room and then went to breakfast – YUM! Lots of lovely choices and really good coffee. Then we pulled into Chicago to start the next part of our adventures.