China adventures, international travel, not quite an expat, school in china, travel, travel with children, travel with kids

memories of China keep filling my brain and my posts…

Serendipity:
Today found us enjoying the company of friends from the States. Joe and Chris, friends of mine from university days, are traveling through Asia and found that they could make it to Nanjing through all the other cities they are wanting to see on this trip over. When I first heard that they would be touring I hoped that we could meet up, but their itinerary was looking pretty tight and not likely to find themselves in our neighbourhood. Having spent a good bit of time in Taiwan, where Joe spent his childhood as an MK (missionary’s kid), and now on the mainland, they felt like they had seen all of Shanghai that they really wanted to see before heading up the Beijing, they came. I got the email from Joe the night before and AEB squealed for joy. She fell in love with the two on our trip up to Boston to see them when she finished preschool. It was a special trip up for her to enjoy all the places from one of her favourite books, “Make Way for Ducklings”. Joe and Chris were wonderful and they have been adopted family to her ever since. I got AEB settled in at school and today we had Christina help with some of the questions we had lingering and she was wonderful. I think now it will be time to drop AEB off, get her settled and then leave to let her settle herself into the rhythm of things – sink or swim time. I then went to meet Joe and Chris at the metro station and they arrived not long after I arrived. I took the weary travellers up to our flat where mum plied them with tea and a good dose of mothering. When I rang up to the flat and she answered I told her I pick up a couple of waifs and strays. It’s a running joke since I was young that I brought home friends who needed help or a dose of family and just assumed it would be fine. We headed over to the alley of the dorms for foreign students at Nan Da (Nanjing University) where I was hoping to have lunch at The Gold and Silver (they had a dish made with thin Chinese eggplant and chicken that was my favourite when last here), but though the sign is there it was not open and there did not seem to be any tables in the place either. We found a place called Old Friends (very aptly named for our day) instead and had a great meal. Actually, it was really the first great meal I feel like I’ve had since I got here. Including my own cooking! We had, just to whet your appetites, mapo tofu, a sautéed eggplant, a water plant and garlic (think spinach like greens), and a dish that’s very Nanjing – scrambled egg and tomato. After lunch we collected our girl early from school – ah, the greeting! She was so excited to see them. It’s so wonderful to have positive male role models for her to be around and support her as she grows. Then it was off to the Confucius Temple. Fu Zi Miao is not merely where the largest statue of Confucius is, it is also the home of the ancient testing centre for wealthy families for the entrance examination for university studies. When I was there last you could walk through the place where the students slept/ate/studied and eventually took the examination – all in one room. We did not make it to that part of the area, but we did make it to the temple part. It was a rainy day, but not enough to stop the good time and dampen spirits. It was a short day, but it was so great for Joe and Chris to finagle a side stop to see us. So, now it is up to us to go and see them up in Boston now that they have seen us where we are living. 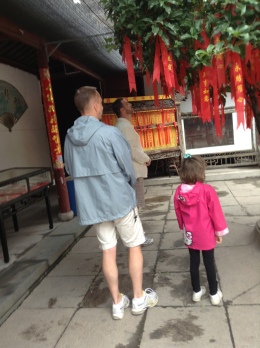 China is gearing up for Children’s Day. This morning as I walked or girl to school we saw that all the students were in uniform. What?!? AEB about stopped in her tracks. A uniform and she did not have one? The embarrassment! I told her not to worry as they would not expect her to be in uniform, but we could ask about getting her one, if she was so inclined. I found out later that they wear the uniform every Monday to school – she’ll be wanting one for sure if that’s the case, even if she only has three Mondays at the school. Today in school there seem to be no regular classes, merely fun and games. The morning has them all in the gymnasium for performances by all the classes and then a party in each of the classes afterwards. What the afternoon holds I can’t even guess. There are so many things we don’t know and don’t know to ask because here they are all just known. They don’t think to tell because everyone just knows. I felt this when I taught with regards to the semester calendar. Everyone just knew when the breaks were and I did not. I asked about a calendar, but was told they did not have one. They had one, just not in English! And for the most part the holidays are ingrained in the national conscience so there is hardly any need to print them out for people. But for us outsiders, it makes like more “interesting”. Like being called two days before a month long holiday to let me know that classes would be suspended for Spring Festival which meant I would not be able to book any travel ahead of time because everyone else had done it W-A-Y in advance and everything was booked. Or you show up to school without a uniform on because everyone knows that you are to wear your uniform on Children’s Day and Mondays, but you don’t because no one thought to tell you. I know that there are lots of Chinese children who come and are in the same situation that AEB is in now. The difference is that I think the schools in the States try to communicate as much as possible to help the foreign student know what to expect and anticipate. I’m sure there are times when the school fails, but it seems to me that there is a lot of information not being passed along to us regarding AEB’s time at the school that would be useful to know. 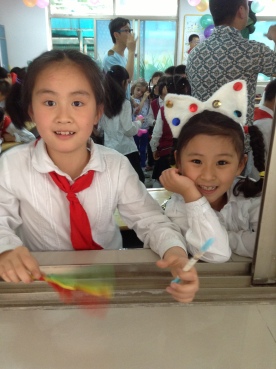 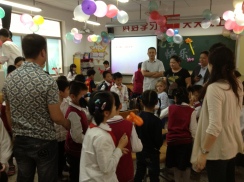 In the meantime, while our girl is enjoying her day of fun mum and I will be heading to the book shop to try and locate copies of the textbooks that her class is using. Her teacher told Christina that the students are all given copies, free, at the start of the year so there are none left to give one to AEB. Sounds about right – order enough books for the students you know you will have. But we’d like for AEB to be equipped so she can participate as she is able. And it will be nice for her to have them for keeps to take home with her so we can keep up the practice once we’ve returned. I have great pictures from the end of Children’s Day which I think will speak for the day better than I could. If she fills me in on anything too thrilling not to share, I will. But I will end this with it was so good to pick up a girl that didn’t want to leave right away because she was having so much fun. 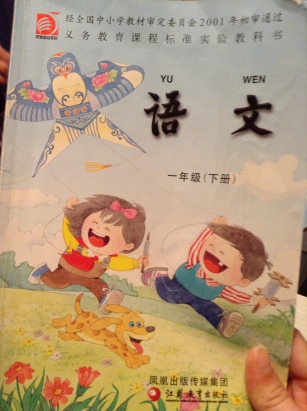