Another day to explore Petra.

Mum and I had talked through how we wanted to explore Petra on our second day. She thought that we could take the horses from the front gate, included in the price of our ticket except for the tip which is a given, to the start of the passage down to the Treasury. From the Treasury we could take a carriage down to the Basin to save our energy for the big hike of the day – up to the Monastery! However, when we got through the gate there were no horses. Hmm. Even the carriages were no where to be seen. We wondered if, since it was a Saturday that might have something to do with it. We walked on. Our girl was not at all thrilled to be walking and made it very clear how unhappy she was about it. Ah, the miserable sounds of grumbling could be heard echoing down the passageway of Petra. The day before had been exhausting, but mum and I ignored her and carried on walking. There was no other choice. When we reached the end of the passage we discovered why the lack of carriage and horse traffic – rock fall. During the night there had been a rock fall and the rubble was being looked over, checked out, and cleared away. Fortunately, we were given the go-ahead to walk past and into the Treasury area and continue on our way. 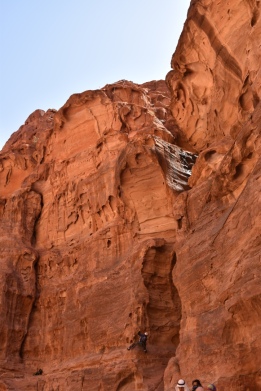 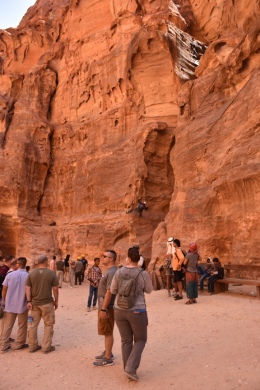 rock crew checking out the fall

Once inside the Treasury area there were no donkeys, no camels, no carriages either. So, on we walked towards the Basin and the start of the hike up to the Monastery. We were starting to feel a bit like Arnold Lobel’s “Mouse Tales” story of the mouse who decided to visit his mother, The Journey. A great book if you don’t know it. And on we went. Once we reached the basin we took a rest. We stopped at the cafe and had something to drink and enjoyed the shade before starting the journey onwards and upwards – 220m above the Basin and roughly 800 steps to the top. Wondrously the steps are not straight up the mountain like some other around the world sites – I’m thinking specifically of Sun Yat-sen’s Mausoleum which is an amazing sight, 700 meters from the lower start and about 392 step straight up to the mausoleum. It’s something I’ve done twice in my lifetime.

At this point I realise that my camera’s battery is on it’s last bar of power and I am kicking myself for not checking it that morning and exchanging it for the fully charged spare battery I brought along so that this would not happen to me. Beware oh ye intrepid explorers that ye not go down the same path as me! At least I could count on AEB to take pictures with her camera since I recharge her battery every night. So, going up all the pictures are taken by her. She’s really working on her eye for framing a shot, seeing the beauty, and trying to capture it in an interesting way. One the way up she starting talking about wanting to be a photographer for the National Geographic Society. We talked about the possibility of her starting her own photography blog, but we’ll wait to see how the idea holds before we start such an adventure.

So, onward and upward…

A and her collection of critters!

There were little stops along the way. The Bedouin have created small tents for rest, purchasing of trinkets, and tea. There was shade along the way, but it was hot, and I had left my asthma spray behind since I had no way of keeping it from the extreme heat. I found myself, at about the halfway mark overheated and struggling with my breathing. We stopped a lot and we drank plenty of water, but it was not enough to keep me from getting close to hitting a crisis. It was not pretty. I share it because I want to make sure others understand that you cannot just go off without knowing what you might be getting into once you start. I would also recommend that you take with you powdered electrolyte to add to your water. You can’t help but sweat, which on the one hand is cleaning, but it does cause an imbalance when there’s nothing going back in to replace what’s being lost in the sweat. I think I would have done much better if I had remotely thought about having such a thing on hand to help in the going up and in the recovery process.

People were lovely on the route. They stopped to see if I was all right or needed help. I was determined to make it to the top. They were also impressed with mum making the hike up and even more impressed when they discovered she had just turned 75. Of course, along the route we had plenty of chances to catch a donkey up – “taxis for you? Ferrari? Lamborghini?” But we were going to make it on foot. Even AEB had turned a corner and was determined to make it up on foot! She was terrific at trying to be helpful and supportive of me while I was slow and plodding, and trying to catch my breath.

We finally made the last climb and then there were a few steps down. We rounded a corner and there we were face-to-face with this colossus. I will admit that I broke into tears. It was an incredible feeling to have made it, but also to be in the presence of such an awesome feat of human ingenuity. I was, I am, profoundly blessed to have been able to go and see for myself. Which is in stark contrast from the young American woman who followed a few minutes after us, rounded the corner and exclaimed, “You’re kidding! We climbed all this was for THAT?!?” (ah, yes, the ugly American rears it’s head once more on our travels abroad – sigh. And we wonder why America is disliked as a species of tourists.) I don’t ever want to wrap my head around the sort of person who can’t appreciate the splendour in front of him/her. Her response, however, did not quench my enthusiasm for being there. I just drowned out her continued grumblings like any parent learns to do with their own child’s grumbling.

Our girl began to build cairns, one for each of us, in response to being there. Mostly I rested up and stood in wonderment and awe. Mum worked her way up to a viewing post that overlooked where we had been and out over the other parts of Petra. 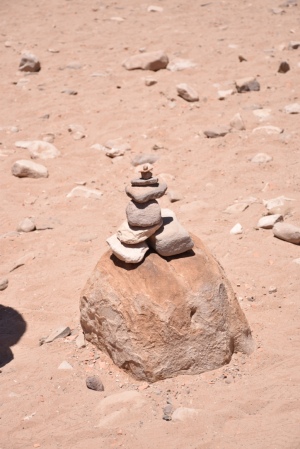 a place to stop for a rest at the top 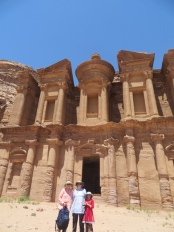 Eventually I felt up to starting the hike down. Along the way we met with more Bedouin. Some were herding goats and some were wanting to sell us a “taxi” ride down to the basin, but being the stubborn ladies that we are, we said “no”. We met one fellow who was very much in awe of mum and her having hiked up and now down. He told her he’d seen others younger try and fail. He was very complimentary and seemed much enamoured of her. I wonder how many camels he would have given me for her? I’m kidding! What would I do with camels? I’d never get them through customs or out of quarantine!

When we got to the bottom the donkeys were at work once again, so we treated ourselves to a ride up to the Treasury. Once at the treasury we negotiated with a fellow for a carriage ride. We got into a bit of a row over the tip. But he finally agreed to what was being offered. On the ride up mum chatted him up. She inherited her mother’s gift of gab – never met someone she couldn’t carry on a conversation with. He talked about the situation in Wadi-Musa around housing promised to the Bedouin and his desire to meet the King and share his concerns with him. There is great respect for King Abdullah II among the people of Jordan. We told him we hoped that some day he might have the chance he so hoped for. Right now many of them live in the caves which isn’t really what the government wants, but the housing in the town isn’t affordable for the Bedouin either – it’s a tough situation and not one that I know all that much about. He also talked of horses – the dream of the Arabian! The ride was very bumpy. AEB sat on my lap wishing she’d chosen to walk instead, but fortunately the ride was not very long. We thought he’d be taking us up to where the horses pick up folk coming back out of the long passageway to the Treasury. When negotiating the tip we had assumed that’s where the carriage would drop us, but he took us all the rest of the way right up to the entrance at the front gate. He got the tip that he had suggested as the “normal tip” in the first place. We discovered that he was more honourable than we were giving him credit for being – it was a good lesson on us!